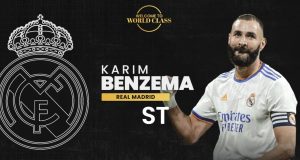 This year has, without doubt, been the best of Karim Benzema’s career, despite his age.

Real Madrid coach Carlo Ancelotti loves his wine, his French wine especially. And when it comes down to summarising why Karim Benzema has been world class in 2021, the Real Madrid manager uses, of course, a wine analogy.

“Karim is like a great French wine. He gets better with age”.says Ancelotti

At 34 years old, Benzema has never been better.

He has reached such a level in 2021 that we can easily say this is the pinnacle of his career – certainly in terms of his individual performances.

Since Cristiano Ronaldo left Madrid in the summer of 2018 to join Juventus, the Frenchman’s role and responsibilities in the team have changed.

This Real team has become his, and it was his teammates’ turn to play for him after he played for CR7 for so many years.

The results of this change have been stunning: in the 2021 calendar year.

Benzema has netted 47 times and created a further 13 for club and country (at the time of writing).

That’s 60 goals involvement in 63 matches in all competitions – which is utterly exceptional.

Scoring is always important for a number nine, obviously, and it has always been part of Benzema’s DNA. In 2021, there were some memorable goals scored by the Frenchman.

He was decisive in the two Madrid derbies against Atletico, including a stunning volley in December (despite not even being 100% fit).

He scored one of La Liga’s best goals of the year against Barcelona with a back heel.

The one against Chelsea in the Champions League semi final first leg was pretty special too, and kept the Merengues in the tie.

But there is also so much more to Benzema’s game than just goals.

It is also about leading by example, being reliable, knowing that you will deliver when you have to but also being a team player and being unselfish when needed. He did all of that as well in 2021.

After the departures of Sergio Ramos and Raphael Varane, and the fact that Marcelo is hardly playing, Benzema has been the one wearing the armband more often than not in 2021.

It is an honour for him. As a kid, watching his idol Ronaldo (the Brazilian) playing at the Bernabeu on television.

He always wanted to do the same and play for the biggest football club in the world. He has done it for 12 years now and the cherry on the cake has been this role of captain.

2021 was also special because of his incredible comeback with France.

After being dropped almost six years ago by Didier Deschamps due to his involvement in the Mathieu Valbuena sex tape case, Benzema came back for the Euros.

He was an instant hit with four goals in the tournament.

Even if Les Bleus disappointingly lost on penalties in the last 16 against Switzerland.

He got over that disappointing early exit by leading France to a Nations League triumph in October – with a goal in the semi final against Belgium and the final against Spain.

His dedication, ambition, determination and the work you perhaps don’t see – his fitness regime, diet, etc. – is all paying off.

He dreamt of winning the 2021 Ballon d’Or, and sure, he had to settle for fourth place, but there’s no doubt that his reaction to this disappointment will be to go again and make 2022 even better than 2021.