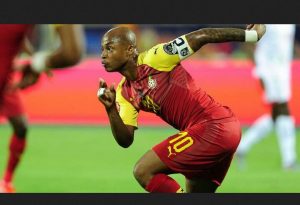 Ghana captain believes a good display in their 2022 World Cup qualifier against,

Ethiopia will be a great first step on the road to Qatar.

With eyes on a return to the global showpiece, the Black Stars are set to,

commence their campaign with a Group G home clash with the Walias on Friday.

Ghana missed out of the 2018 gathering in Russia, halting a run of three successive appearances between 2006 and 2014.

“We’re totally focused on the task ahead of us.

We want to start this World Cup qualification really well at home, so we’re ready,

we’re well prepared,” Ayew, who featured at the 2010 and 2014 World Cup tournaments, said at the pre-match press conference on Thursday.

“Now is the time to go and do the job. We know that it’s six games,

but this is the first one and we want to start with a great victory in front of our fans.

“Jonathan [Mensah], Jordan [Ayew] and [Mubarak] Wakaso are all players who have played at the World Cup,

and we know what it is. We know the power behind it, we know the level of football behind it,

and what especially it brings to the people of Ghana and the nation, so we know that we have to do our job.

we personally individually perform to make it happen.

But it’s a long journey. It’s a marathon, six games, and it starts tomorrow.”

That only four players from Ghana’s last World Cup appearance in 2014 still feature,

in the current set-up highlights the changed face of the Black Stars.

and Liverpool-linked Abdul Fatawu Issahaku are among the group seeking to reach the World Cup for the first time.

members of the current national side but they are unavailable for Friday’s match due to injury.

“I’ve been with two different generations of the squad.

I’m very happy with the boys that are here. We work really well, the group is gelling well.

We’ve been in camp for since Monday.

“So, I’m convinced and sure that the players who are going to represent the nation are all,

ready to make the nation proud. So to be frank, the boys here are very talented,

good players, determined to succeed. So I belief that with patience, with hunger, we’ll be able to succeed.”