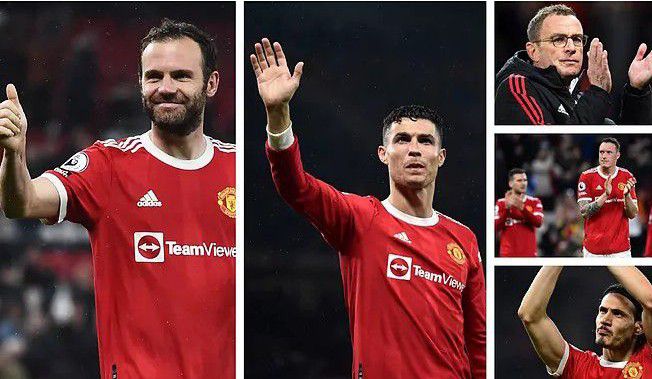 Monday night saw Manchester United play at Old Trafford for the last time this season, with their final two Premier League games coming away at Brighton and Crystal Palace, which means the Red Devils’ fans saw some players for the last time.

to peace between the fans and the players. For a moment, there was communion again.

What’s more, the United crowd applauded several players in what appeared to be a farewell.

Rangnick was kind enough to give him his first Premier League start of the season and Mata responded with a fine performance against Brentford.”

The Spaniard was given a standing ovation when he made way for Phil Jones in the 75th minute.

Cristiano himself approached him to highlight his importance at the time of the change.

David de Gea also directed praise at him after the match.

Mata, after several seasons in which his contract expired and he chose to renew it, will finally leave Manchester United.

The 34-year-old Spaniard arrived in 2014 as the second-most expensive signing in the club’s history at 44.73 million euros.

Since then he has played 283 games, scored 51 goals and registered 47 assists.

The Uruguayan striker’s contract is also coming to an end, and Rangnick also gave him some game time.

At 3-0, he played the last 15 minutes. El Matador has played 57 games for Manchester United, during which time he has scored 19 goals and provided seven assists.

The homegrown player, unlike Mata or Cavani, did not have the opportunity to say goodbye on the pitch.

Lingard’s contract is up and he was left on the bench. The playmaker will not be short of suitors after his good loan spell with West Ham last season.

In terms of the coach, it’s a case of see you later at Old Trafford.

He will step down as coach but will continue as an adviser to Erik ten Hag, and it’s a job he will combine with his new job as Austria manager.

With United, he has managed 27 games with a record of 11 wins, nine draws and seven defeats.

He has one more year on his contract, but the last 15 minutes he played against Brentford felt like a farewell. Injuries have marked his time at Old Trafford.

Jones has a total of 229 appearances for the Red Devils, during which he time he has scored six goals and provided 10 assists.

The Portuguese forward has one more year on his contract, but his future is far from clear.

He left the pitch visibly moved and dedicated some emotional words to the Sky Sports cameras.

“What a finale,” he commented.

Ralf Rangnick, who will continue as a consultant, also did not clear up Ronaldo’s future.

“It is important to know what he wants, if he wants to stay.

This is something we should talk about between me, Erik [ten Hag] and the board,” he said.

He is injured and therefore didn’t get any minutes.

He said goodbye to Old Trafford some time ago.

Rangnick confirmed his departure recently, too.

“As things stand, Pogba will not renew his contract with Manchester United,” he stated.

In total he made 233 appearances, scored 39 goals and provided 51 assists.