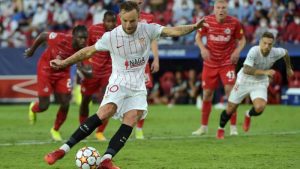 No less than four penalties were given in the first half.

Red Bull Salzburg draw against Sevilla on Tuesday, setting a curious new first for the clubs – as well as for Salzburg wonderkid Karim Adeyemi.

3 – Karim Adeyemi is the first player to have won three penalties in a first half of a #UCL match (since det. data collection 2003/04).

@SevillaFC_ENG – @RedBullSalzburg is the first game where four penalties have been conceded in a first half of a single #UCL game since at least 2003/04 season.

He is now only one short of Arjen Robben’s all-time season record for penalty wins.
Dutchman earned four for Bayern Munich during the 2013-14 campaign.