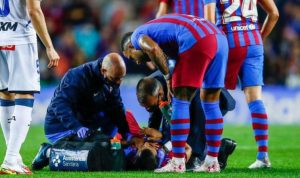 Barcelona have announced that Sergio Aguero will not play for three months after suffering chest pains against Alaves on Saturday.

The ex-Manchester City striker Aguero, 33, had cardiological tests in hospital after being taken ill.

Aguero will now receive treatment while his health is monitored.

“During the next three months, the effectiveness of treatment will be evaluated in order to determine his recovery process.”

Aguero received treatment for several minutes on the pitch before being taken to hospital.

Read Also: Lionel Messi: ‘I Would Love’ To Return To Barcelona As A Sporting Director

On social media, Aguero said he was “well and in good spirits to face the recovery process”.

The former Manchester City striker was making just his second start for Barcelona after sustaining an injury in pre-season.

He joined the Spanish giants on a two-year deal in the summer after a 10-year spell at City.

During which he became the club’s all-time leading scorer with 260 goals in 390 games.

Speaking before Barca’s Champions League match away to Dynamo Kiev on Tuesday.

“I talked to him and he’s calm. He’s confined to his room but, considering the situation, he’s calm.”