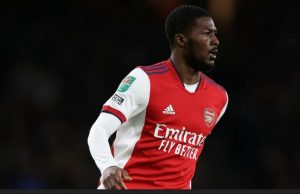 As Roma have confirmed the signing of Arsenal utility man Ainsley Maitland-Niles on loan until the end of the season.

Maitland-Niles has struggled for playing time this term, making just 11 appearances in all competitions.

He had been expected to leave the club in the summer, with a move to Everton looking likely before Arsenal blocked his exit.

This frustrated Maitland-Niles who publicly criticised the Gunners on social media, leading to Mikel Arteta banning him from first-team training.

The pair soon reconciled but this has not translated into increased playing time this campaign.

Roma have now offered him a chance to resurrect his career, with the Giallorossi confirming his arrival on Saturday.

“I am just delighted to be here and can’t wait to crack on.”

“I want to help the team and show what I can do as a player.

“Thank you to the fans for the support they’ve already shown me – I hope we can go on to do something great by the end of the season.”

Maitland-Niles is the latest former Premier League player to try his luck in Italy.

Chris Smalling, Fikayo Tomori and most recently, Tammy Abraham, have all made the same move to great effect in recent times.

Maitland-Niles will be hoping for similar success in Serie A, as will Roma who are looking to secure a top-four spot this season.