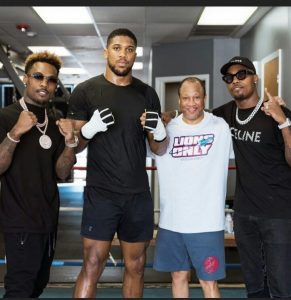 AJ is currently spending time in America following his loss to the Ukrainian last month and has been spotted in various gyms during his trip.

At the end of the Usyk fight, many were left questioning his tactical approach.

As he attempted to outbox the smaller technical genius, rather than use his size and strength advantages.

Questions have also been asked of his training team – led by Rob McCracken – and speculation has subsequently been rife about potential changes. 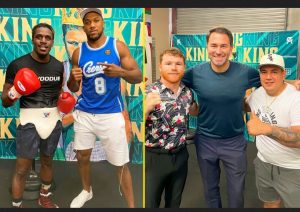 Then, at the weekend, a video emerged showing Joshua hanging out with Canelo Alvarez in Eddy Reynoso’s gym in San Diego, California.

Now, he has been pictured working with Texas-based trainer Shields, who has given an interview and confirmed AJ was doing so because he is looking for a new coach. 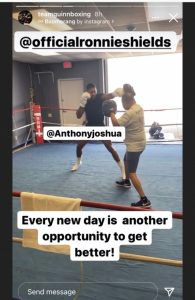 “It was them who reached out to me,” Shields told ThaBoxingVoice.

“They reached out to me and they asked me would I be interested in taking a look at AJ.

And he would like to come down to Texas and see if things could work out between him and I.

“I said, ‘Yeah, no problem, I would love to take a look at him, love to see if we can mesh together.’

“It would be great to get him to reclaim his world titles that he lost to Usyk and I think I’ve got the capabilities to help him to do that.

“In the last two days, everything seemed to go well.

The first day was just all talk, we talked for about three or four hours.

“And when he came back today I told him I wanted to do just some light padwork with him just to show him everything we talked about.”

“We watched a few rounds of the Usyk fight together and I just pointed out some things that I thought he should’ve done that he didn’t do.

“And We had a great talk yesterday, today was even greater.

There’s something I showed him that he said, ‘Man, I was never taught to do this.’ 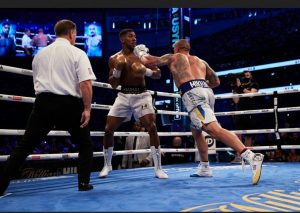 “It surprises me that a guy who was heavyweight champion of the world don’t know certain things.

“Like he said, ‘European boxing is different from boxing in the United States.’

He realised that he had to come to the United States to get something different.”

Reflecting on the Usyk fight, he added:

“Obviously it wasn’t the right game plan, I told him he didn’t fight like himself.

I think he’s a much better fighter than what he showed in that Usyk fight. 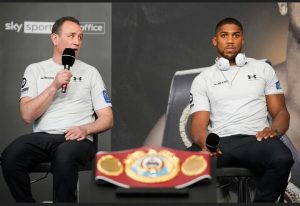 “I watched a few rounds with him, I told him about certain things and he said,

“I don’t know what their game plan was, but obviously it wasn’t the right one.

And I guess he didn’t feel like it was the right one so this is why he wanted to make a change.”

When asked about how they would approach a rematch with Usyk together, Shields divulged:

“I’m going to tell you the first thing he told me when he came here.

Look, I’m gonna be a dog in this next fight.’ And that’s his words.

“He told me, ‘I’m gonna be a dog in this fight, I just need you to show me how to be the best dog that you can teach me to be.”

Joshua explained he would only be looking to take one of his current coaches with him moving forwards – Angel Fernandez.

“I spoke to him about some other guy that came with him,” Shields said.

“He explained to me that he really wants this guy there, I told him it’s no problem with me.

“Angel. He told me he wanted Angel to be with him and I told him, ‘Yeah, it’s no problem.’”