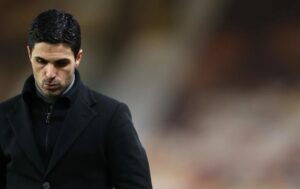 Since  Mikel Arteta appointment in December 2019, the Gunners have accumulated no less than 15 – 15 – red cards in the Premier League.

That is three times more than anyone else in the league over the same period.

Let’s take a look back through time and remind ourselves of them all.

Despite scoring the Gunners’ goal in this 1-1 draw, Aubameyang’s main contribution will be remembered as this horror tackle on Max Meyer.

He was initially shown a yellow but, after VAR consultation, was sent off.

And, quite unsurprisingly, Arsenal’s subsequent appeal was rejected – the audacity to even appeal that is quite something.

Here we go, it’s the first of Luiz’s treble of reds.

Number one came, spectacularly, on his return to Stamford Bridge.

In all fairness to the Brazilian, it was Shkodran Mustafi’s woeful back pass that started the laughable passage of play.

A weak ball back to the goalkeeper allowed Tammy Abraham to nip in and round an onrushing Bernd Leno,

before Luiz practically hugged him to the floor and, inevitably, saw red at his old stomping ground.

And swiftly on to number two.

After pandemic Arsenal is finally back in action with a cracker of a game at Manchester City – a huge tie for Arsenal.

On 24 minutes, Pablo Mari is forced off with injury and David Luiz gets a run out.

Then, just before half time, the Brazilian’s failed interception allows a Kevin De Bruyne pass to reach Raheem Sterling, who makes it 1-0.

And, three minutes after the interval, he brings down Riyad Mahrez in the box and receives a straight red before De Bruyne converts the penalty for the second in a 3-0 win.

Subbed on in the 71st minute.

VAR consultation needed after a high tackle on James Justin in the 74th.

Not a great four minutes for Eddie Nketiah.

Arsenal’s fifth red card under Arteta was awarded to record signing Nicolas Pepe early in the 2020/21 season against Leeds.

The Ivorian was given a straight red after VAR spotted him headbutting Ezgjan Alioski off the ball.

It led to a huge debate about his future at the club, and he’s yet to really recover.

This list wouldn’t be complete without an appearance from Granit Xhaka.

Everyone’s favourite walking suspension received Arsenal’s sixth sending off under Arteta in December 2020 for an off-the-ball incident with Ashley Westwood in their 1-0 home defeat to Burnley.

The Swiss international appeared to raise his hand to the midfielder’s throat and was subsequently dismissed after a VAR check.

The summer signing was completely done by a Theo Walcott turn and brought him down as the former Gunners favourite was sprinting away.

Looked a nailed on booking, but obviously Gabriel didn’t feel that way.

It seems strange that, had the Brazilian swiped Willian Jose down and made it look like an attempt for the ball, he would’ve stayed on the field with just a booking.

But, here we are. The defender played fair and stayed on his feet, accidentally making the slightest contact with the Wolves striker to give away a penalty and receive a red card.

Arsenal appealed the decision, but they were dismissed.

From bad, to worse.

Goalkeeper Bernd Leno rushed out of his area to intercept a ball over the top and, well, got it wrong. Very wrong.

Seemingly caught in two minds, Leno jumped as if to head the ball but when realising it was only at chest height, decided to punch it out of play – right in front of the linesman.

Dani Ceballos‘ second yellow here was a little harsh, but he did give the referee a decision to make.

The midfielder dangled a leg and definitely made contact with his opponent, although just how much of that was his fault is up for debate.

Nevertheless, a red’s a red.

Round two for Xhaka.

The Swiss midfielder was given his marching orders for a two-footed lunge on Joao Cancelo which replays showed didn’t actually involve a lot of contact.

That being said, you can’t dive in with your studs showing in the modern game.

Any player knows that… or, they should know that.

Things began so well for the Gunners against Manchester City, but a few moments of madness saw them collapse.

Gabriel was given a yellow card for protesting a penalty, and just moments later, he saw another.

Gabriel bodychecked Gabriel Jesus on the halfway line and left the referee with no choice but to send him off.

It was Arsenal’s 100th Premier League red card, and unsurprisingly, they’re the first team to reach that milestone.

Diogo Jota was through on goal and Xhaka, in a desperate attempt to get in the way of the ball, only went and kung-fu kicked the Liverpool man.

Xhaka only had eyes for the ball, but there’s no excusing it.

Arsenal didn’t fancy getting through the second leg of the Carabao Cup semi-final with their full stock of players, so Thomas Partey got himself sent off.

Liverpool were already 2-0 up and cruising towards the final, but Partey – fresh off the plane after returning from the Africa Cup of Nations that day – picked up two yellow cards as a substitute.

Gabriel Martinelli was shown two yellow cards for two bookable offences in the same five-second phase of play in this Premier League clash.

With Arsenal 1-0 up with 20 minutes to go, Martinelli picked up two yellow cards at once

– the first for shoving Daniel Podence as he took a throw-in, and the second for barging Chiquinho over as he chased back. Incredible.