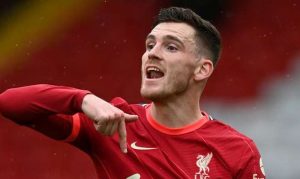 The Scotland international left-back has joined the likes of Trent Alexander Anold  Fabinho, Alisson,Vagil Van Dijk  to commit his long-term future to Jurgen Klopp’s side.

Andy Robertson has signed a new contract at Liverpool that will keep him at Anfield through to the summer of 2026.

The 27-year-old Premier League and Champions League winner – who has taken in 177 appearances for the club,

was already tied to the Reds for another three years, but has now agreed to an extended stay on Merseyside beyond that point.

He has become the latest senior star to commit his long-term future to Jurgen Klopp’s side.

Robertson, who is expected to recover from ankle ligament damage in time to make a first competitive appearance of 2021-22 at home to Chelsea on Saturday,

“Obviously when the negotiations started and it looked as if my future was going to be here longer term than what it was, then I think it’s no secret that I’m happy at this club.

“I want to stay at this club for as long as possible and to extend my stay, it’s always a happy time for me, for my family.

We’re settled here, we love everything about this football club and I’m glad that the journey is continuing.”

He added: “When you sign for a massive club, I still remember the day as if it was yesterday,

when I signed here and obviously you have ambitions to become a regular player for Liverpool, to win trophies for this club, to do everything else but the way it’s gone has been excellent.

“But since the very start of my career I’ve always been one to look forward: that’s in the past,

that’s something that I can sit down with the people who want to listen to me when I’ve hung up my boots and retired and I can tell them all the stories that we’ve already made.

“But I’m certainly one, and I know a lot of people in this training ground just now are people to look forward and people [who want] to create more history, more stories.

Hopefully, people get bored of me when I’ve retired and I can sit down for hours and hours and tell them about all the stories!

“They’re certainly building up but I want to make more and obviously hopefully starting with this season.

We want to achieve more, we want to bring hopefully more trophies, more happiness to this club.

“The only way of doing that is by working hard and having the same application that we have done since day one.”

Who is next for Liverpool contract?

With Robertson committing to fresh terms, attention can now shift to getting more deals over the line.

Liverpool have been quiet in the transfer market this summer, with French centre-half Ibrahima Konate their only notable addition.

The Reds have been busy, though, tying down key men and hope there will be more positive news to report on that front in the coming weeks.

Mohamed Salah is next in line for a new deal, with contract talks ongoing with an Egyptian superstar.

His current deal is due to expire in 2023 but, after hitting 126 goals for Liverpool through 215 appearances, an improved agreement is in the pipeline.