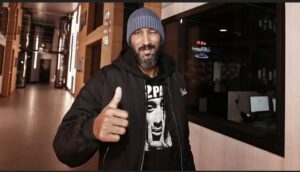 Former French  striker Nicolas Anelka has expressed his belief that Kylian Mbappe will depart Paris Saint-Germain in the summer to join Los Blancos.

Mbappe’s contract with PSG runs until June, but the two parties have not reached an agreement to extend his deal,

and the Frenchman is expected to become a free agent come July.

Meanwhile, Real are facing his team in the Champions League’s Round of 16.

“It will be a special game.”

“Everyone says that he is going to go to [Real] Madrid.

And will he want to make a difference to show precisely that he can play at [Real] Madrid?

“It’s possible that he wants to win to leave PSG in style before going to Madrid, but the truth is that I don’t know what’s going on in his head.

If he wanted to stay, I think he would have signed [a contract renewal] earlier. I think he will be at [Real] Madrid next year.”

Anelka went on to analyse the upcoming tie and explain why Real Madrid may have the edge over the Ligue 1 side.

“Two great teams, two great clubs. I give Madrid a small advantage because they have more experience.

“When moments like these come, they are always a very strong team.

But PSG have extraordinary players so they can also get a good result.

“There are so many quality players that I don’t know who will be the best.

We’re going to see how Madrid approach the game: if they’re more defensive or dominant like they are in Spain.”

Messi has yet to live up to expectations at PSG, having scored just twice in the domestic league,

but Anelka believes that the Argentine star needs more time to adapt to his new environment.

“I don’t think he wanted to leave Barcelona.

He was forced to leave and it’s not easy for him.

It’s something new for him, but Messi is Messi and in games like that he shows that he’s a great player and I think he’ll have a good game against Madrid.”