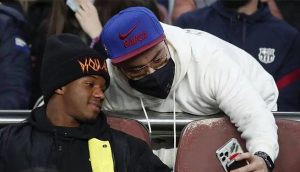 Ansu Fati had his house burgled on Saturday during Barcelona’s Catalan derby against Espanyol, while the footballer was watching on as his teammates beat their neighbours.

The player’s family, though, were in the house at the time of the robbery.

According to La Vanguardia, the burglars entered from the upper floor, taking money, jewellery and watches.

At that moment, the player’s family were in the ground floor living room watching the Barcelona match.

Also Read : Messi: ‘Barcelona Will Grow With Xavi, He Knows The Club Perfectly’

Noises alerted the family, who then called the police so as to avoid having to confront the thieves themselves. By the time police arrived they had departed.

Unfortunately for Fati, the alarm and security cameras were off at the time.

Ansu Fati has since filed a police report.