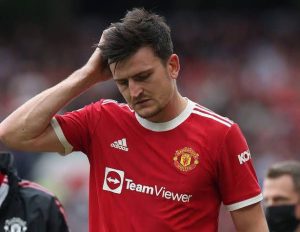 Antonio Conte has snubbed the likes of Harry Maguire and Luke Shaw after a report named the nine Manchester United stars he’d build around if drafted in to succeed Ole Gunnar Solskjaer.

Solskjaer is under increasing pressure as manager of the club where he became a legend.

Manchester United had been reliant on the likes of Cristiano Ronaldo and Jesse Lingard to secure last-gasp victories this season.

Unlike their main three title rivals, United were cutting it fine when emerging with three points.

Their luck ran out on Sunday, however, when Liverpool put their rivals to the sword with relative ease.

The 5-0 thumping put Solskjaer’s position in the spotlight, though for now at least, the Norwegian appears safe.

Nonetheless, The Telegraph claimed Solskjaer could have as little as three games to save his job.

Tottenham are up next in the league. They are followed by Atalanta in the Champions League then a tasty local derby with Manchester City.

If Solskjaer is unable to rescue his perilous position, a series of top level managers will be in the frame.

Conte would arguably be the best fit given he is available and has achieved previous success in England with Chelsea.

And in doing so, Conte is seemingly not convinced by the leaky defence Solskjaer has constructed with Harry Maguire, Luke Shaw and Aaron Wan-Bissaka from United’s usual back four all snubbed.

The nine players named were:

Conte is known for playing with a back three and wing-backs which would explain Wan-Bissaka’s omission and Telles’ inclusion.

The ex-Crystal Palace full-back prioritises the defensive side of the game at the expense of his attacking threat.

Also notably absent from the nine-strong list are any of United’s central midfielders barring Pogba.

That area of the pitch is the one that has come in for the most criticism in recent seasons.

Meanwhile, Man Utd are ‘prepared to lose’ Paul Pogba and are ‘accepting’ of the fact ties will be severed after the stance of the Glazer family was revealed, according to a report.

Pogba is in the final year of his Old Trafford contract.

And despite ESPN claiming United have tried hard to extend his deal, they claim he will now be departing at the end of the season.

They state Man Utd are ‘prepared to lose Pogba for free next summer’.

Despite his undoubted talents, United are noted to have ‘no alarm or concern’ over Pogba leaving for free.