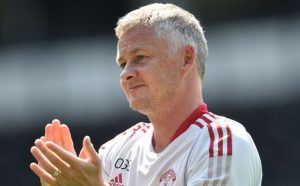 Manchester United have already strength the team with the  likes of Raphael Varane and Jadon Sancho,

The Red Devil’s Boss has suggested that Manchester United are unlikely to make further additions in the summer transfer window,

although, did confess that “you never know in the world of football”.

United have been linked with the likes of Eduardo Camavinga, Kieran Trippier and Saul Niguez,

with there still being time for deals to be done ahead of the August 31 deadline.

Solskjaer, though, insists that any further new arrivals at Old Trafford would be a “bonus”,

claiming that he doesn’t expect there to be much activity at the club before the window closes.

“I don’t think much is going to happen. If something happens, it is a bonus. You never know what happens in the world of football.

“But we’ve had a very good window. I am happy with what we’ve done.”

United have been active in the transfer window already, with their first signing of the summer,

having been former Aston Villa goalkeeper Tom Heaton, who has returned to Old Trafford for a second spell with the club.

Solskjaer then landed Sancho from Dortmund in a deal worth around £73 million ($101m).

The Red Devils finally getting their man having chased the England international’s signature for a while now.

Real Madrid centre-back Varane was the third player to have completed a switch to join United in the summer transfer window.

The World Cup winner, who was required to quarantine when he arrived in the UK,

with his contract at the Bernabeu having been due to expire in 2022.

The likes of Axel Tuanzebe, Tahith Chong, Facundo Pellistri, James Garner and Brandon Williams have all been allowed to leave on loan,

with the latter having joined Norwich City until the end of the season.