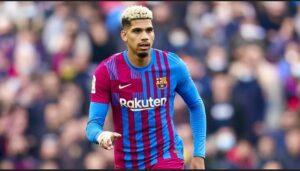 Barcelona centre-back Ronald Araujo is expected to miss Thursday’s Europa League knockout game against Napoli after picking up an injury.

The 22-year-old complained of pain in his leg during the first half of Sunday’s 2-2 draw with Espanyol and was hauled off at half-time, with Eric Garcia coming on to replace him.

Araujo has been sent for scans to determine the severity of the injury but AS state that Camp Nou officials have already accepted that he is not going to be fit for the visit from Napoli this Thursday.

It is noted that Araujo had been dealing with discomfort in his leg in the build-up to the Espanyol game,

but eventually decided to play through the pain and is now paying the price.

With Clement Lenglet and Samuel Umtiti both injured, Garcia and Oscar Mingueza are Xavi‘s only options to accompany Gerard Pique at the back.

The former looked incredibly rusty against Espanyol on his return from a five-week absence but may be promoted to the starting lineup because of a lack of options.

In what was a tough day for Barcelona’s defenders, Pique was shown a red card late on against Espanyol for a second bookable offence.

He trudged off the pitch to a chorus of whistles from the rival fans,

but Araujo was having none of it and quickly gestured towards the home supporters to joke that they are going to be relegated to the second tier.

That gesture landed Araujo in hot water with Xavi, who reminded the centre-back that he must respect everyone at all times, and now Araujo has apologised on Twitter.

“I want to apologise to everyone at Espanyol for the unfortunate gesture I made,” he wrote.

“It was the result of the tension experienced during a derby as intense as this one.

I consider myself a person who respects fans and rival clubs and that is why I am not proud of what happened.” 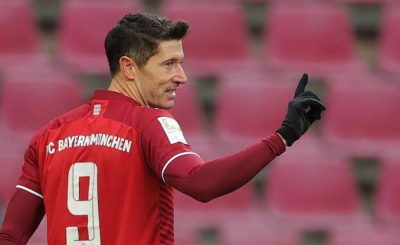 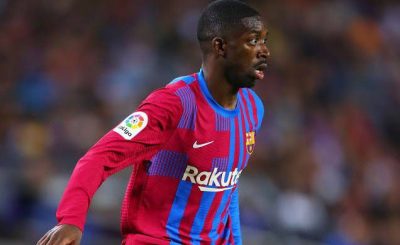