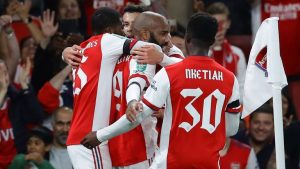 Alexandre Lacazette, Emile Smith Rowe and Eddie Nketiah were on target as Arsenal beat AFC Wimbledon 3-0 at the Emirates Stadium.

Lacazette opened the scoring for the much-changed Gunners when he converted from,

the penalty spot after Gabriel Martinelli had been brought down(10th) .

Read Also: Juventus Come From Behind To Earn Their First Serie A Victory Of The Season Against Spezia.

Arsenal were made to wait to extend their lead but substitute Emile Smith Rowe finally turned home a loose ball (77th),

before Nketiah’s moment of inspiration capped the victory (80th).

Cedric Soares’s cut-back was slightly behind the striker but he quickly adjusted his feet to,

flick the ball beyond AFC Wimbledon goalkeeper Nik Tzanev using the heel of his right boot.