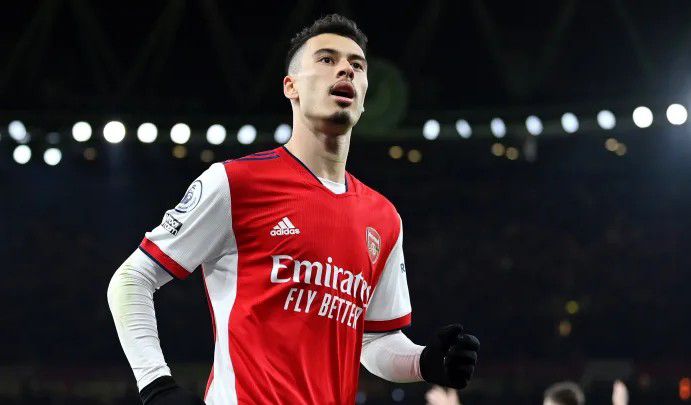 Arsenal forward Gabriel Martinelli will wear the club’s number 11 shirt next season after trading down from the number 35 jersey he has held since first arriving in north London in 2019.

The Gunners launched their new 2022/23 home kit on Thursday morning, with fans quickly noticing the availability of ‘Martinelli 11’ shirts instead of ‘Martinelli 35’.

Having struggled at the start of the season during a difficult period for the whole squad,

the young Brazilian has come into his own since November and has 10 Premier League goal involvements to his name 28 appearances going into the final round of fixtures.

The number 11 has been worn by several Arsenal legends over the decades,

Liam Brady and George Armstrong also sometimes wore it in the days before squad numbers,

despite both being far more typically associate with number seven.

In the Premier League era, 11 has been worn by the likes of Robin van Persie, Mesut Ozil, Marc Overmars and Sylvain Wiltord, as well as Martin Odegaard last season.

It has been vacant this season after Odegaard switched to number eight when he returned to north London for a permanent transfer from Real Madrid.