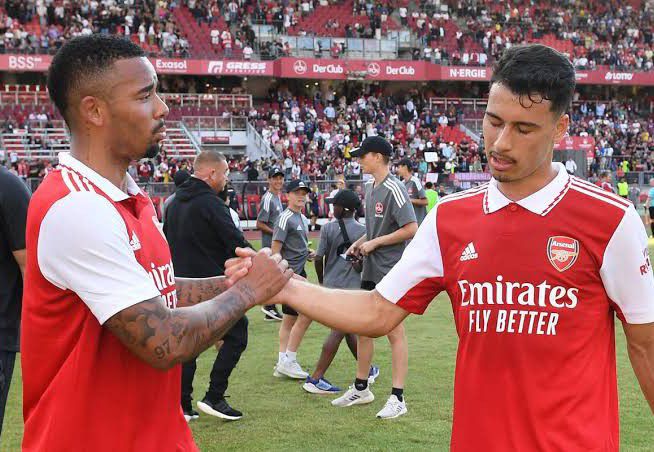 Arsenal duo Gabriel And Gabriel Jesus  have been included in the Brazil squad for the 2022 World Cup, while Liverpool striker Roberto Firmino and Arsenal defender Gabriel Magalhaes have not made the cut.

Jesus had previously been left out of the most recent Brazil squad for the games in September, however he was always been a favourite to go to the World Cup.

The striker, who joined Arsenal in the summer from Manchester City for £45million, has impressed this season at Emirates Stadium

and is keen to thrive for Brazil in Qatar after failing to score at the last World Cup in 2018.

Jesus will be joined in the Brazil squad by Martinelli, who has seemingly got the nod ahead of Liverpool’s Roberto Firmino.

The 21-year-old has found the net five times during the current campaign and he has been in fine form for Arsenal this season.

Martinelli is part of a strong Brazil attack, which includes Neymar, Raphinha and Vinicius Junior.

Arsenal centre-back Gabriel, who scored the winner against Chelsea on Sunday, will be disappointed to not make the cut.

He has been in good form this season but Brazil boss Tite has several options at centre-back, with Eder Militao, Gleison Bremer, Marquinhos and Thiago Silva the four chosen to go.

In total there are 12 Premier League players in Brazil’s 26-man squad, with goalkeepers Alisson and Ederson making it.

Chelsea’s Silva is the only defender from England to go, but the midfield is stacked with Premier League talent – including Lucas Paqueta of West Ham.

In attack, Antony of Manchester United has made the cut and so has Tottenham’s Richarlison.