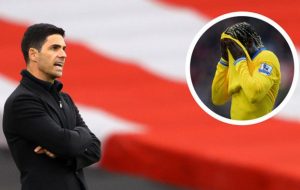 The formar Arsenal full-back has lost the confidence when he watches the Gunners on TV.

An everpresent force in Arsene Wenger’s successful sides at Emirates Stadium of yesteryear,

Sagna feels the team is now going to “concede a stupid goal” every time he watches the Gunners.

Arsenal have now lost both of their games to start the campaign,

which has piled further pressure on manager Mikel Arteta.

“The DNA of the club is gone, When I watch Arsenal now, honestly,

I know that they are going to lose the majority of the time, that something is going to happen, that we are going to concede a stupid goal.

“When I was playing, anyone would be excited to join Arsenal, now .we have lost our identity.”

Poor start to the season

Arsenal’s defeat to Chelsea comes after they lost 2-0 to newly promoted Brentford on the Premier League’s opening weekend.

They are now tied for 18th place on goal differential.

Arteta had hoped for the opposite to play out heading into the year, as an eighth-place finish last campaign had created pre-season discontent among many supporters.

The Gunners face Manchester City away in their next league match,

meaning three defeats in three games is a strong possibility.

Also Read: Lukaku Described His Openers Goal As The Best.

In recent weeks the manager has taken on a positive outlook, even as the on-field results have been bleak.

On Sunday, just before the Chelsea defeat, Arteta claimed his vision was finally coming together.