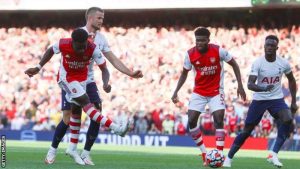 Saka scored a third with a low shot, before Son Heung-min pulled one back for the,

visitors from 15 yards out, but it was not enough to stop Arsenal moving above Spurs in the league table.

Read Also: I Will Take Penalty Again ‘Without Fear Or Dread’ Bruno Fernandes

Tottenham were top of the Premier League after winning their first three games.

But have now lost three league games in a row, conceding nine goals in the process.

Arsenal are now 10th, one place above Tottenham, with both sides on nine points from six matches.