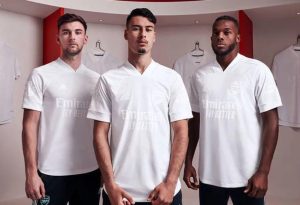 Arsenal will wear an all white kit in their FA Cup tie with Nottingham Forest on Sunday as part of the No More Red initiative alongside adidas, raising awareness of knife crime and youth violence.

The Gunners will remove the iconic red from their kit when they face Championship outfit Forest in the third round at the City Ground.

The kits will not be available for commercial purchase and instead be awarded by the club to individuals who make a positive impact in the community.

The initiative has been supported by Arsenal legend Ian Wright and supporter Idris Elba.

“Every young person deserves the opportunity to express themselves.

We can never accept loss of life through youth violence as ‘normal’ in our city and it’s so important that we all work together to create a better environment for young people.

“By giving young people more places to play sport, more support, and access to individuals who can inspire them.

Together we can help make a difference to young people in London.”

“From the time young people leave school, until the time they’re at home with family.

There is often a void, a dangerous spike of nothing to do, where nothing can easily turn to something dangerous.

“If there continues to be no options for this after-school period, we will always see gangs form.

The ten outfield shirts worn by Arsenal players will be given to organisations Arsenal in the Community.