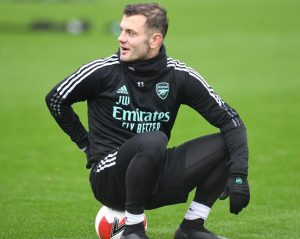 The Switzerland midfielder  Granit Xhaka will miss the game against Spurs and, with Thomas Partey and Mohamed Elneny at the Africa Cup of Nations, it leaves Mikel Arteta with one senior central midfielder – Albert Sambi Lokonga.

Youngster Charlie Patino, who scored his first goal for the club in their cup quarter-final against Sunderland, is also an option but the Gunners are still extremely short in the middle of the park.

However huge amount of Arsenal supporters on social media have a solution to their problems – sign Jack Wilshere.

Read Also: How The Premier League Would Look If Positions Were Based On Instagram Followers

The former Gunners midfielder is currently training with the club to maintain his fitness, with the 30-year-old seeking to continue his playing career.

And Aaron the Gooner says Arsenal should give Wilshere a career lifeline with options limited ahead of the derby.

“For the last two months, he’s had a footballer training with us – Jack Wilshere,” the fan told Jason Cundy and Jamie O’Hara on the Sports Bar. 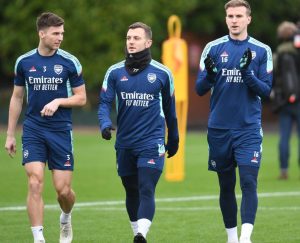 He’s been training with the first team every single day for the last couple of months.

“We are so short in midfield. We’re going to Tottenham at the weekend and who have we got? Lokonga and Patino.

“They’re going to be playing in midfield.”

Wilshere even claimed earlier this season that he would reject a move Manchester City to sign for Arsenal, if they approached him.

“If both Pep [Guardiola] and Mikel Arteta rang me tomorrow, if they both offered me three-year contracts then I’m going to Arsenal.”