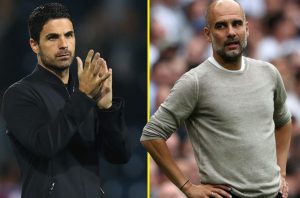 Arteta will miss the match after returning a positive Covid test on Wednesday but his men will be hoping to claim a fifth straight top-flight win.

The north Londoners smashed Norwich 5-0 on Boxing Day but saw their game with Wolves called off on Tuesday.

City, meanwhile, followed up their big win over Leicester on the 26th by seeing off Brentford on Wednesday.

Another win for Pep Guardiola’s men will see them extend their lead at the top to eleven points.

This Premier League clash will take place on Saturday, January 1.

It will be held at the Emirates and will kick off at 12:30pm.

As well as being without boss Arteta, Takehiro Tomiyasu, Cedric Soares, Calum Chambers and Ainsley Maitland-Niles are also out due to Covid.

Sead Kolasinac remains Arsenal’s only injury absentee due to his ongoing ankle issue.

Man City have no players ruled out.