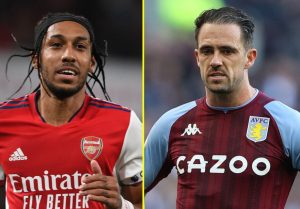 Arsenal will look to return to winning ways when they host Aston Villa in an intriguing mid-table clash on Friday evening.

The Gunners are without a win since their north London derby triumph last month after successive draws in the Premier League.

But, Arsenal haven’t lost since August with Alexandre Lacazette striking a late equaliser against Crystal Palace to preserve their recent record on Monday night.

Villa meanwhile are looking to bounce back after throwing a two goal lead away on route to a 3-2 defeat to Wolves in the west Midlands derby on Sunday.

Dean Smith’s side do boast excellent form against Arsenal though having won the last three successive meetings between the two sides.

The Gunners will host Villa at the Emirates on Friday, October 22.

The Premier League clash will kick off at 8pm.

Villa cruised to a 3-0 win over Arsenal during this fixture last November with Ollie Watkins bagging a second-half double.

Read Also: Chelsea Duo Romelu Lukaku And Timo Werner Out For ‘Some Matches’

The home side remain without Granit Xhaka for Friday’s clash.

The midfielder suffered ligament damage in his right knee during last month’s win over Tottenham and will be missing until the new year.

Saka meanwhile is a doubt after he was booted in the back of his leg in a reckless challenge from James McArthur in the 2-2 draw on Monday.

The England international was forced off with an injury during the break and Arsenal are yet to give an update on the teenager’s fitness.

Aston Villa meanwhile are close to welcoming back £30million summer signing Leon Bailey after he missed the last three games due to injury.

Matty Cash has handed the Claret and Blues a boost by recovering from a dead leg he suffered while Bertrand Traore is also in line for a return.

Trezeguet is Villa’s long-term absentee as he continues his rehab from a cruciate ligament injury he sustained last season.