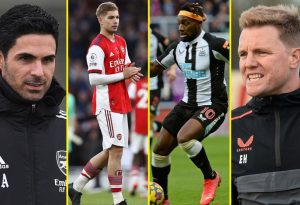 Arsenal return to action at the Emirates Stadium when they welcome Newcastle United to north London on Saturday.

The Gunners have enjoyed an excellent Premier League campaign under Mikel Arteta but suffered a slip by falling to a 4-0 defeat at the hands of Liverpool last weekend.

For the Magpies it’s quite simply a must-win clash with Eddie Howe’s side without a victory in the Premier League this term.

Newcastle will need to get some points on the board and fast if they’re to close the gap on top flight safety, however a clash with Arsenal is far from the ideal encounter to do that.

The Premier League clash is due to take place on Saturday, November 27 at the Emirates Stadium in London.

Arteta has a near-full strength side to choose from ahead of the weekend clash with the Magpies.

Arsenal’s only absentees are Granit Xhaka and Sead Kolasinac who are long-term absentees.

Newcastle will also have almost a fully fit squad to choose from with Paul Dummett the only the player likely to miss out.

“We are really looking forward to the game, as I said after a defeat you want to put it right straight away.

First of all, play as well as we can and we will be closer to winning the match.”