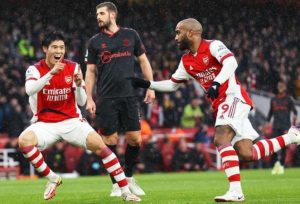 Arsenal boosted their Champions League qualification hopes as they cruised past Southampton at the Emirates Stadium despite captain Pierre-Emerick Aubameyang being dropped from the squad.

Stand-in skipper Alexandre Lacazette opened the scoring for the Gunners in the 21st minute, finishing off a superb 16-pass team move.

Arsenal dominated throughout and added a third after 62 minutes with defender Gabriel nodding in a Gabriel Martinelli corner.

The Gunners jump up to fifth in the Premier League table, one point off the top four, while Southampton stay 16th.