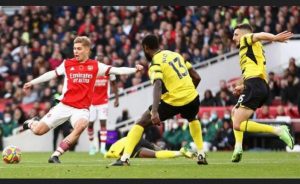 The in-form Smith Rowe registered the 100th league goal of Arteta’s tenure with a low drive from outside the box after 56 minutes.

Read Also: Kroenke: Arsenal Not For Sale; We Are Just Getting Started.

Gunners captain Pierre-Emerick Aubameyang had a first-half penalty saved by Ben Foster following a poor challenge by Danny Rose on Alexandre Lacazette – and the Hornets goalkeeper produced another fine stop to keep out Gabriel’s header shortly before half-time.

Watford were fired an early warning when Bukayo Saka had an eighth-minute finish ruled out for offside at Emirates Stadium.

The Hornets’ first attempt did not arrive until the 40th minute but Joshua King squandered the chance to earn a late point, shooting into the side-netting after pouncing on a mix-up between Aaron Ramsdale and Ben White.

The visitors’ afternoon was made worse as Juraj Kucka was dismissed for a second yellow card late on and defeat left Claudio Ranieri’s side 17th, two points above the relegation places.

It is a sixth victory in eight Premier League games for Arsenal, who move up to fifth – level on points with fourth-placed West Ham.