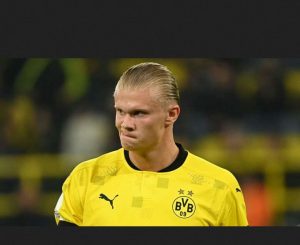 The Norway forward is being follow by top teams across Europe, but Wenger is sure he will follow the money to England

Erling Haaland will find the lure of playing in the Premier League impossible to resist,

The Borussia Dortmund striker has been linked with several of Europe’s top teams in recent years,

with Manchester City, Manchester United, Liverpool and Chelsea all reported to be interested.

English teams are not the only ones in the frame, however, as Paris Saint-Germain, Real Madrid and Barcelona have also been linked to the Leeds-born star.

Wenger believes Haaland, 21, will return to his country of birth before long, telling Bild Live:

“I think that will happen. The economic power of the Premier League is too strong.

“English football is dominant because it is where the most money is.

The best players always go the best way to make the most money.”

The French coach is convinced Haaland will continue to develop into one of the world’s,

“Haaland is likely to be the next high-profile goalscorer after Mbappe. He’s a super talent,” Wenger added.

“His ambition, his will to score goals and the ability to fight in a duel [set him apart].

He’s there and wants to win, there is something in him that is great for a striker.”

Since joining Dortmund from Red Bull Salzburg in January 2020, Haaland has scored 63 times in 64 competitive games.

He is already off to a solid start this season,

netting three goals and registering two assists in as many Bundesliga matches.

Haaland also found the net for Norway as they drew 1-1 with Netherlands on Wednesday.