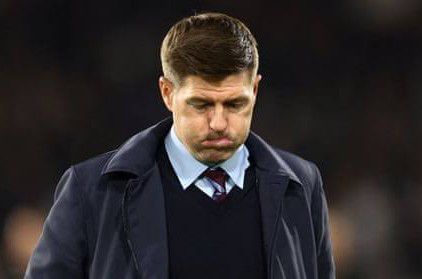 Gerrard was appointed less than 12 months ago after impressing with Rangers in Scotland.

“We would like to thank Steven for his hard work and commitment and wish him well for the future.”

A dismal showing at Craven Cottage saw Villa go down 3-0 having had a player sent off,

another score an own goal and a third concede a penalty, leaving the club teetering above the relegation zone with just two wins after 11 games.

Gerrard told reporters after the game:

“We’ll see what happens — I’m a fighter, I will never ever quit anything.

Quitting is not in my DNA. But the reality is that it’s not good enough for this club.” Less than an hour later, he was sacked.

An early favourite to take over is former Tottenha manager Mauricio Pochettino, who has reportedly been made the club’s top target as the club’s wealthy owners prepare to splash the cash to lure a top coach.