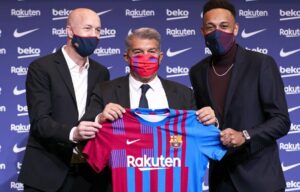 The Garbon striker Pierre-Emerick Aubameyang has opened up on his rocky relationship with Arsenal manager Mikel Arteta during his presentation as a Barcelona player.

Bringing a lengthy saga to an end. A few weeks prior to his exit,

Arteta stripped him the Arsenal captaincy for multiple disciplinary breaches and was dropped from the first-team squad, an incident which characterised the pair’s rocky history.

When quizzed about the tail end of his Gunners career on Thursday,

Read Also: 10 Players Man Utd Failed To Convinced – And Who They Signed Instead (Photos)

“[It was] a difficult few months. I’ve never wanted to do anything wrong, it’s in the past.”

Asked if the problem was just with Arteta:

“Yeah, I think it was just with him. I can’t say much, he wasn’t happy, I stayed calm and that’s it.”

Although his time at the Emirates Stadium ended on a sour note.

Aubameyang did enjoy plenty of success during the early portion of his Arsenal career.

Netting 22 Premier League goals in his first two full seasons at the club, as well as bagging the winner in the 2020 FA Cup final.

Barcelona will be hoping he can replicate that form for the rest of the campaign,

though Aubameyang did point out that he may need some time to get back up to speed.

“I haven’t played a game in a long time but it’s very clear in my head that I’ll be ready soon to play and to help.

I know we’re going to get back to the top little by little.”