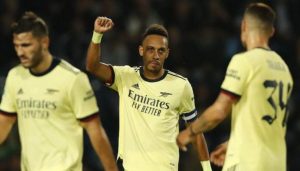 Aubameyang marked his first start of the season with two first-half tap-ins and a curling finish after the break.

He also acrobatically set up Nicolas Pepe for the third, with Bukayo Saka slotting in the Gunners’ fourth.

Alexandre Lacazette came off the bench to fire in his side’s sixth.

The win could have been even bigger too, with Martin Odegaard hitting the outside of the post from a tight angle and Pepe striking the bar with a chip.

West Brom fielded six debutants, five of them teenagers, but showed spirit right to the end on what was a difficult night for them.

The Baggies, who have made a superb start to this season under new boss Valerian Ismael, pressed high,

got the ball forward quickly and would have taken an early lead had goalkeeper Aaron Ramsdale, on his Arsenal debut, not pushed Tom Fellows’ whipped shot aside.

Even with the tie clearly decided they continued to carve out chances,

with Taylor Gardner-Hickman twice denied by Ramsdale in the second half.

Ultimately, though, Arsenal – who now face AFC Wimbledon – were a class above, with the ruthless Aubameyang looking sharp after recovering from coronavirus.

He could hardly miss in scoring both of his first two goals, firstly following up Saka’s saved shot to slot in before turning the ball in again after Pepe had hit the post.

His third was much harder to execute, but he did so with aplomb, curling in from 18 yards after cutting into the box.

With the Gabon striker among the goals, Pepe and Saka opening their own accounts for the season,

and Lacazette adding to the competition up front, Gunners boss Mikel Arteta can be more optimistic about facing Manchester City in the Premier League this coming weekend.

“The commitment of every player is always there 100%. We try our best to give the fans what they want.

“This hopefully can give us something to build our confidence for the next games. We had to work hard and keep pushing.

“Everyone knows I like the space [in behind a defence]. My team-mates played very well. It was a good game today.

“We still have 36 games left so we will give our best for a good season.”