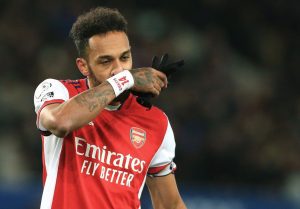 The Gabon intentional once again fired a blank in the loss to Everton on Monday, meaning he has now gone six games without a goal.

He has missed several big chances to score in recent matches.

Including a glaring chance to equalise in dying minutes of the 2-1 defeat at Goodison Park.

And Keown believes it’s up to Arteta now to try and turn Aubameyang’s fortunes around as he admitted that his captain may have fallen out of favour in his pecking order.

“He’s fallen out of love with the player, he doesn’t quite believe in him.”

“OK, you’ve given him a new contract six months into his tenure as manager when they won the FA Cup and that’s all well and good, but since then he hasn’t performed in the same way.

“The player is at a loss of form and in those moments, if I look at it from the player’s point of view, you want that support from the manager and want someone to stand by you.

“You certainly expect, if you’ve been dropped, to come on in a game of high importance.

“I do believe that Aubameyang should have started [vs Everton] and I’m trying to find the logic from the manager.

“Personally, I would play him.”

“He’s lost his confidence and it’s about how he regains it.”

“These are all the skills of a manager.

“The top managers find a way. I always found with the top managers I played under that they never wavered, they always showed that undeniable belief for me.

Martin Keown admits Arteta’s big call to drop Aubameyang from the team is only coming back to bite the boss, as it’s not helping Arsenal return to winning ways.

“It becomes a problem when you lose games.”

“They’ve lost the last three away games, and if they were winning those games you’d have to say this is brilliant management but when they don’t win those games, that’s when the question marks come.

“It looks then as though the manager doesn’t quite know the XI he can really trust and rely upon.

“Arsenal away from home at the moment are losing too many games, conceding way too many goals and things are not right.

So you can’t look at those decisions and say they were absolutely right by the manager.”