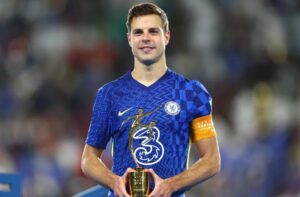 Chelsea is a club with a lot of legendary figures at the helm.

In modern days, the likes of John Terry, Frank Lampard and Didier Drogba have ruled the roost,

following in the footsteps of Gianfranco Zola, Peter Osgood, Ron Harris and plenty of others before them.

If there were any doubts about Azpilicueta’s worthiness to join that list, Saturday’s Club World Cup final should have put them to bed.

Wearing the captain’s armband, the veteran defender put Chelsea on his back – just as he has done so many times before

– and dragged them to the final trophy missing from the Roman Abramovich era.

It took Azpilicueta 459 games to win every trophy on offer to him at club level:

What makes Azpilicueta’s success so legendary is the fact that he has played a near-vital role in all of that, despite being signed as an unknown reserve.

Chelsea paid £7m to bring Azpilicueta over from Marseille in 2012.

The summer after their first Champions League triumph, and it’s safe to say that expectations weren’t particularly high.

He was obviously a good player, but whether he was ever going to be anything more than that was unclear.

For £7m, most at Stamford Bridge didn’t really care if he was a long-term signing or not.

Chelsea made those signings all the time and, up until a few years ago, still did.

Initially a right-back, Azpilicueta proved to be so good that each of his managers have forced themselves to find a way to get the Spaniard into their squad.

Whether it be on the right, covering on the left or in his more-recent central role, Azpilicueta has always got the job done without any complaints.

Most modern players hate being shifted around on the pitch.

Complaints of not being deployed in their preferred position are rife these days,

including at Chelsea, but it’s testament to Azpilicueta’s professionalism that most fans couldn’t actually tell you what his favoured role actually is these days.

His manager asks him to go out and play, and he plays.

– Gary Cahill officially had the armband until his own exit in 2019 but scarcely featured, at which point the Spaniard took the role on full-time.

Many didn’t see him as a natural leader, particularly as Terry’s vocal approach was all younger fans will have known,

but Azpilicueta ignored any doubts and continued to do his job on the pitch, leading by example and dragging those around him with him.

It was in Saturday’s final against Palmeiras that we saw perhaps the epitome of Azpilicueta’s leadership.

After winning the late penalty which always looked like deciding the game,

the veteran picked the ball up and looked to be setting up to take the effort himself, much to the confusion of every Chelsea fan.

He absorbed all the whistles, the time-wasting from the Palmeiras defenders and the mind games from the goalkeeper,

only to turn around and hand the ball to the composed Kai Havertz to take the shot and win the game.

It was supreme game-management and perfect leadership from Azpilicueta, who proved his willingness to take a back seat and do the dirty work for the greater good of the team.

That’s all we’ve ever known from Azpilicueta.

His personal highlight reel will be incredibly short, but his back-seat role to Chelsea’s unparalleled success over the last decade cannot be matched.

The Blues wouldn’t be where they are today without him.

With his contract at Stamford Bridge winding down, those moments of leadership could be coming to an end.

If this does prove to be Azpilicueta’s final season at Chelsea,

he will go out as an absolute hero and once whose name should be sung on the terraces for years to come.