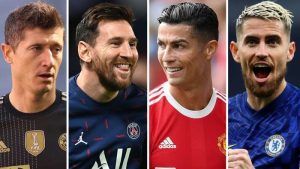 Lionel Messi, Cristiano Ronaldo and Robert Lewandowski are among the nominees on the 30-man 2021 Ballon d’Or longlist to have been released by France Football.

No player has won as many Ballon d’Or trophies as Messi.

so could the legendary Argentine claim the prestigious award for a seventh time?

Messi has had better years, but has still managed to score 37 goals and notch 14 assists in 46 games for club and country.

He might have had a slow-ish start to life at PSG, but those are still incredible numbers!

The likes of Euro 2020 winner Jorginho and his Chelsea team-mate N’Golo Kante also have their sights set on a shock win.

A list was leaked which revealed the 30 names, 20 of which have been confirmed by FranceFootball thus far.

Now that a 30-man list of top performers from the last 12 months has been compiled, the voting process can begin.

A selection of international journalists, national team coaches and captains,

will be polled to determine the winner, with each voter being asked to pick out their top five.

Once that process has been completed.

The prestigious prize will be handed out at a glitzy ceremony in Paris on November 29.