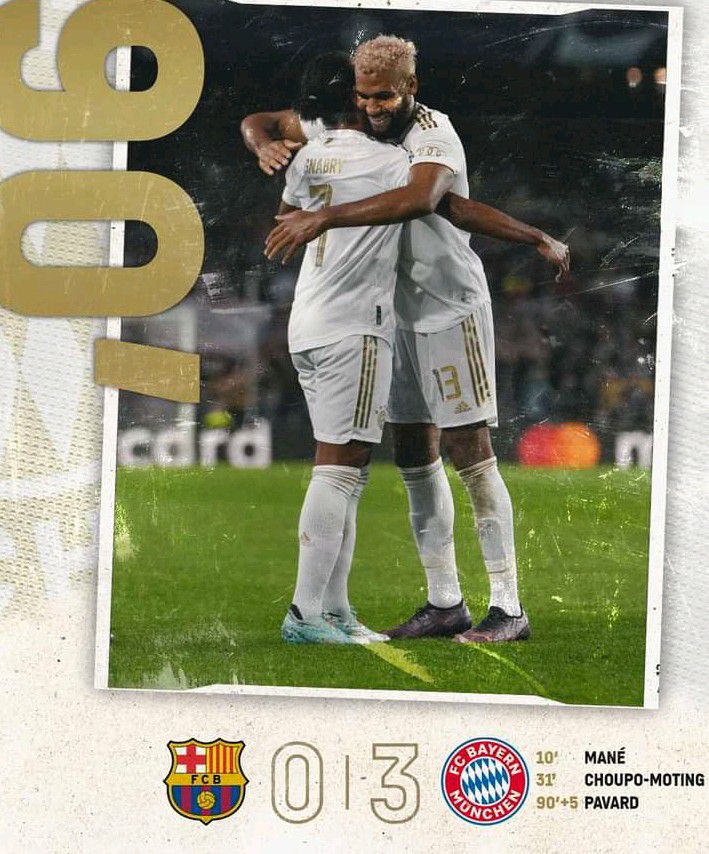 Barcelona endured a truly wretched night as confirmation of another Champions League group-stage exit was followed by their latest defeat to Bayern Munich.

Sadio Mane, restored to the starting XI after being left on the bench for Saturday’s Bundesliga win over Hoffenheim,

starting after Sergi Roberto’s shoulder injury suffered against Athletic Bilbao on Sunday – all too easily before lifting the ball over Marc-Andre ter Stegen.

It was far from vintage Bayern in a first half broken up by plenty of niggly fouls,

with Barca posing a threat through the pace and trickery of Ousmane Dembele but unable to find any sort of final ball.

They fell 2-0 behind when another perfect Gnabry pass was matched up with a second well-timed run,

this time from Eric Maxim Chopou-Moting, who coolly slotted his fourth goal in five games between the legs of Ter Stegen.

An important Bellerin intervention and Ter Stegen save from Jamal Musiala denied Bayern a third before the break,

while Robert Lewandowski was awarded a penalty against his former club after a challenge by Matthijs de Ligt,

only for English referee Anthony Taylor to change his decision after being advised by VAR Stuart Attwell to consult the pitchside monitor.

Bayern did initially celebrate a stylish third goal after half-time, but Gnabry had just strayed offside as he collected Joshua Kimmich’s pass before curling an excellent effort into the far corner.

They did eventually make it 3-0 with the last kick of the game, unmarked substitute

Benjamin Pavard stroking home a half-volley at the back post to complete a desperately dismal night in Barcelona’s recent history.