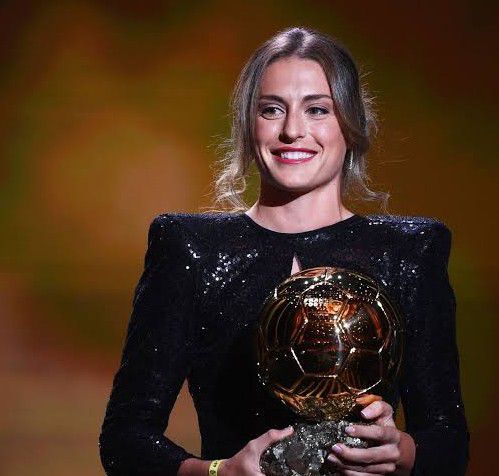 Barcelona midfielder Alexia Putellas has won the Ballon d’Or Feminin for the second year in a row.

This year’s Ballon d’Or Feminin was awarded for performance in the 2021-22 season, rather than the calendar year.

The Spaniard missed Euro 2022 due to an agonising knee injury on the eve of the tournament,

which could rule her out of next year’s World Cup too, but voting was judged on the entire season.

“I’m very happy to be back here.” “Happy and pleased.

The truth is a year ago I was able to win this prize.

It pushed me to want to do even better. Without my team-mates this wouldn’t have been possible.

“Some of my team-mates are here present tonight. I want to thank the technical staff, the coaches who help me each and every day.

“I injured my knee at a time I didn’t think it could be possible.

The next time [at the awards] I hope to be back on the pitch.”

Asked how her recovery is going, she said:

“It’s going well but it’s not a battle that is won just yet.”

She scored 18 goals and backed that up with a league-high 18 assists as she helped Barca to the La Liga title.

Putellas was also voted the Champions League’s best player, despite their 3-1 defeat to Lyon in the final in Turin, Italy.

In 2021 Putellas won the Ballon d’Or after a treble-winning campaign with Barcelona.

Aside from Putellas, Only Hegerberg – who finished seventh this year – and Megan Rapinoe have previously won the Ballon d’Or Feminin following its inception in 2018