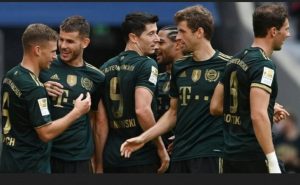 Serge Gnabry, Robert Lewandowski and Eric Maxim Choupo-Moting also got on the scoresheet as Vasilis Lampropoulos put through his own net.

Bayern were playing in a dark green Oktoberfest kit, their fourth different shirt this season.

Victory was all-but assured at half-time when Bochum centre-back Lampropoulos converted into his own goal to hand the hosts a 4-0 lead at the Allianz Arena.

The thrashing takes Bayern’s goal tally to 20 after their opening five games of the season,

although Wolfsburg can move back to the top of the table if they beat Eintracht Frankfurt on Sunday.