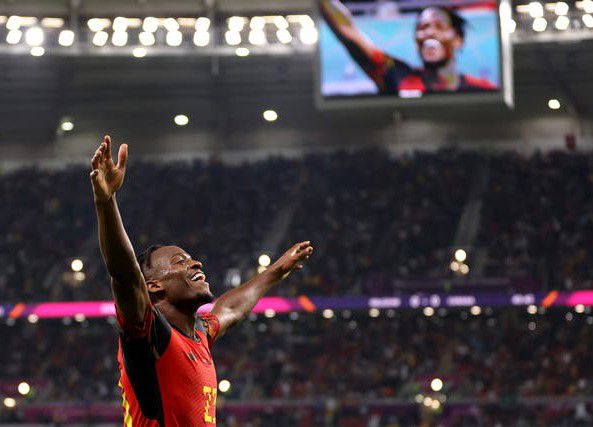 Michy Batshuayi hands Belgium a hard-fought 1-0 win over Canada in their World Cup opener in Qatar.

The result means the Red Devils move top of Group F with Croatia and Morocco both tied on one point – following their 0-0 draw earlier on Wednesday – after the opening round of matches.

to take the lead in the 13th minute from the penalty spot after a Yannick Carrasco handball at a corner.

Alphonso Davies stepped up but his poor shot was denied by Thibaut Courtois who dived low to his right to make the stop.

minute when Richie Laryea went down in the area under a challenge from Axel Witsel, but it was deemed to not be a penalty.

Two minutes before half time and Belgium took the lead against the run if play through Batshuayi.

He latched onto a hopeful long ball by Toby Alderweireld and slotted his shot into the bottom corner.

The second half was a scrappy affair with Belgium keen to disrupt Canada’s rapid attack at any opportunity.

Canada had plenty of shots on goal but lacked cutting edge.

Their best opportunity to equalise came in the 49th minute when Jonathan David nodded a free header over the bar.

Substitute Cyle Larin also had a good chance to levelwith ten minutes of normal time left, but his header was caught by Courtois.