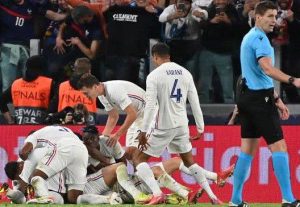 French team have done it! Three second half goals see them come from behind to sink Belgium in Turin.

What a game, what a comeback, what an advertisement for the Nations League! Kylian Mbappe was the driving force behind the French response but it’s Theo Hernandez, with his first international goal, who will take the headlines. His 90th minute goal has sent Les Bleus into the final!

What a turnaround from France! They’ve got four added minutes to hold out and complete a sensational comeback win over Belgium. Can they do it?

France are in front! Pavard swings a cross into the box from the right wing. There’s a deflection that sends the ball into the path of Theo Hernandez. He brings it down and drills a shot back across goal beating Courtois and sending France into the final!

Drama! Carrasco is played in behind Pavard on the left wing and whips a cross into the box. Lukaku meets it on the volley and guides it into the far corner. Is that the winner?

Into the last 10 minutes now and the nerves are starting to show. Lukaku is dispossessed on the edge of the box and then France send a crossfield ball straight out of play.

Close! Mbappe weaves and dribbles his way into the front of the box and sends a shot inches wide of the left hand post!