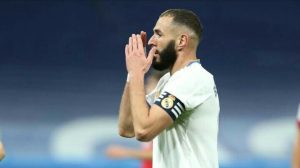 Karim Benzema has been handed a one-year suspended prison sentence after being found guilty of being complicit in the attempted blackmail of his former France teammate Mathieu Valbuena.

The Versailles Court also ordered the Real Madrid star to pay a 75,000 euro fine for his involvement in the sex tape scandal that resulted in Benzema being frozen out from the French national team for several years.

Meanwhile, Noel Le Graet, the current president of the French Football Federation, made clear three weeks ago that the court’s decision would not affect Benzema’s career with Les Blues.

This means that despite being found guilty, the Real Madrid striker will participate at the 2022 World Cup in Qatar with France after leading them to UEFA Nations League glory back in October.

Benzema was called up to take part in last summer’s European Championship, and he has scored nine goals 11 official games since his return to the national team.

The Real Madrid striker’s defence insisted to the court that he had no intention of blackmailing Valbuena, as he allegedly attempted to help his former France teammate.

The Prosecutor’s Office requested the lowest jail sentence against Benzema but imposed him the highest possible fine, with the Frenchman being the only person who was not accused of blackmail in this case.