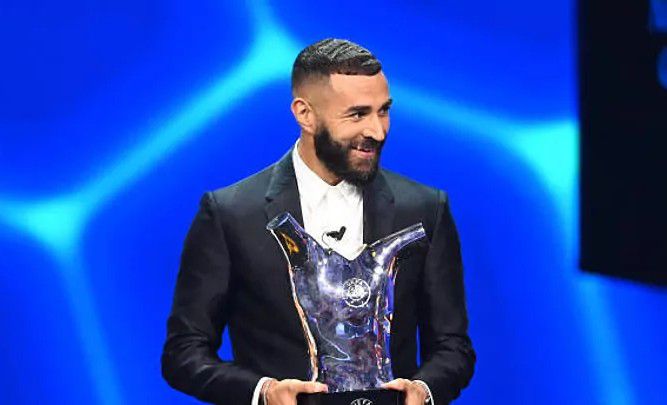 The France International Karim Benzema was voted UEFA Men’s Player of the Year at a gala in Istanbul ahead of Thibaut Courtois and Kevin de Bruyne.

In the finest campaign of his career, Benzema netted 44 goals in 46 games for Real Madrid.

He scored 27 times in LaLiga Santander, two goals in the Supercopa de Espana and 15 times in the Champions League.

Benzema led Real Madrid all the way to the Champions League title, also netting six goals in 10 games for the French national team.

European title, and his fifth since he joined from Lyon in 2009,” reads UEFA’s website.

“His final tally of 15 goals – including a joint-record ten in the knockout stages – earned him top spot in the competition scoring charts, with 27 in the Spanish Liga also a domestic best.

“The evergreen 34-year-old started the campaign by helping France to UEFA Nations League glory and never looked back,

consecutive hat-tricks in the Champions League knockout stages against Paris and Chelsea the highlights of a goal and trophy-filled season.”

Benzema succeeds Chelsea midfielder Jorginho, who won the Champions League with the Blues and the 2020 European Championship with Italy.

The selection process is carried out by a jury that consists of the clubs that participated in the group stage of the Champions League,

Europa League and Conference League in 2021/22 and a panel of journalists selected by European Sports Media.

“Jury members chose their top three players, with the first receiving five points, the second three and the third one,” reads the UEFA website.

“Coaches were not allowed to vote for players from their own team.”