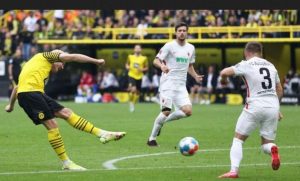 Raphael Guerreiro scored a penalty and Julian Brandt added a second either side of half-time.

Dortmund took the lead in the 10th minute through Guerreiro’s spot-kick, after Donyell Malen was fouled in the area.

Augsburg pegged them back 10 minutes before the break when Zeqiri, on loan from Brighton,

reacted first to fire home the rebound after Arne Maier’s shot from distance crashed off the bar.

Six minutes after the break, the hosts went back in front after a superb counter-attack,

Involving Marius Wolf and Marco Reus was finished off with a deft shot from Brandt.

Reus and substitute Thorgan Hazard each hit the woodwork.

As Dortmund squandered chances to wrap the game up in the second half.

But they held on to move a point behind champions Bayern Munich.