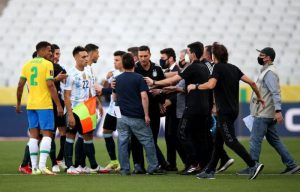 The visitors walked off the pitch at the Corinthians arena after the officials came out to stop the game.

four England-based players for Argentina had to quarantine.

Although it did not name the four, the players with English Premier League clubs are,

Martinez, Lo Celso and Romero all started the game in Sao Paulo.

Around one hour after the game was suspended and while Brazilian players organised,

“By decision of the match referee, the match organized by Fifa between Brazil and Argentina for the World Cup Qualifiers is suspended.

“The referee and the match commissioner will submit a report to the Fifa Disciplinary Committee,

which will determine the steps to be followed.

Under Brazilian rules, visitors who have been in the UK in the 14 days before entering the country must quarantine for 14 days on arrival.

“We got to this point because everything that ANVISA directed, from the first moment, was not fulfilled,

“[The four players] were directed to remain isolated while awaiting deportation, but they did not comply.

They went to the stadium and they entered the field, in a series of breaches,” the official added.

Argentina boss Lionel Scaloni said it was disappointing a resolution could not be found before the game got under way.

“I am not looking for any culprit.

If something happened or did not happen, it was not the time to make that intervention.

“It should have been a party for everyone, to enjoy the best players in the world.

I would like the people of Argentina to understand that as a coach I have to defend my players.

“At no time were we notified that they couldn’t play the match.

We wanted to play the match, the Brazilian footballers too.”