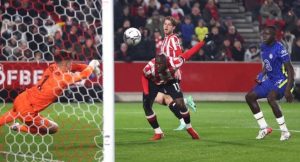 An own goal by Sweden defender Pontus Jansson put the Blues ahead,

before Jorginho’s penalty ensured his side reached their first semi-final in the competition for three years.

With his selection plans disrupted by Covid-19 and injuries, Chelsea boss Tuchel gave debuts to three teenagers including 18-year-old Harvey Vale, who headed his side’s best chance of the first half straight at the keeper.

But it was Brentford who carved out the better openings before half-time with Kepa Arrizabalaga marking his rare start with three fine saves to deny Yoane Wissa, Mathias Jensen and Rico Henry.

Henry almost scored an own goal at the other end before Jansson inadvertently sliced Reece James‘ cross past Alvaro Fernandez.