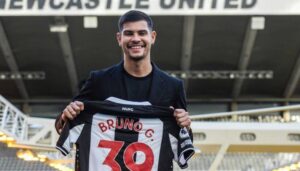 Newcastle new signing and Lyon former midfielder Bruno Guimaraes has claimed the Magpies “definitely” have potential to be a bigger club than Arsenal, who were also interested in signing the Brazilian last month.

It was the Gunners who were initially leading the chase for Bruno, who quickly made a name for himself with Lyon,

after only arriving in Europe from Athletico Paranaense in January 2020.

But Newcastle eventually agreed a deal with Lyon worth up to €52m (£44m) if all add-ons and bonuses are triggered.

While Bruno signed a long-term contract until 2026 that makes him the highest-paid player currently at St James’ Park.

Having ultimately chosen Newcastle over Arsenal, Bruno’s response when asked by The Guardian whether he considers the former to have potential to be the bigger of two was: “Definitely.”

“It’s already a club with a great tradition, a big history.

I have no doubts about my decision to come here. I believe in everything the owners told me about their project.

“We’re going to be a big power in world football.

The owners were very up front that, this season, the idea is to stay in the Premier League.

Newcastle currently remain in the bottom three but are only one point from safety and unbeaten in the league since before Christmas, taking five points from their last three games.

Bruno is yet to make his debut, with no further fixtures played since the transfer deadline passed.

Defenders Dan Burn and Matt Targett joined him in arriving at the club late in the window.