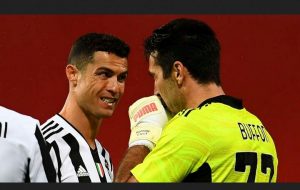 Gianluigi Buffon  who worked with the Portuguese in Turin, defends why a superstar forward wanted a new challenge

The Portuguese “rightly thinks about himself a lot“, says Gianluigi Buffon,

Criticism has been directed at a five-time Ballon d’Or on the back of his decision,

Ronaldo has been accused of leaving Juve in the lurch,

with a second stint at Old Trafford agreed late in the summer transfer window,

but Buffon claims to have no issue with an all-time great dictating where and when he does things.

Read Also: Jorginho Agent Reveald: ‘It Would Be A Dream For Him To Returns To Italy,

“I don’t think the fans should be surprised.

He has the reputation of a great professional who rightly thinks about himself a lot.

“In these three years he has contributed with great performances and scored many goals.

I don’t see anything illogical in his choice to leave, he thought a lot about it.

“Juve are in a transition period, I don’t know if it’s generational or the skeleton.

You pay a bit when these things happen.

When you have a coach like [Massmiliano] Allegri, maybe you don’t reach the target, but you get close to it.”