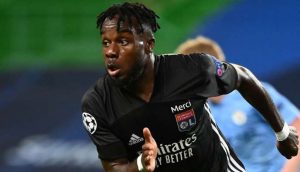 After six years at the Groupama Stadium, the 24-year-old Cote d’Ivoire international,

joins the Clarets on a five-year deal for a fee in the region of €15 million.

With this move, the former Metz star will remain at Turf Moor until 2026.

His presence in the English topflight side would serve as a major boost for,

Sean Dyche’s men who are hoping to impress in the 2021-22 campaign.

“I am excited to be joining Burnley in the Premier League and to play with and against,

many of the greatest players in the world,” Cornet according to club website.

“which i have developed the greatest respect for Burnley and what the club has done.

So, i welcome the challenge of hard work and am fully committed to doing what I can to contribute.

And I look forward to what we can achieve.”

After the international break – where he is expected to represent the Elephants,

in September’s 2022 Fifa World Cup qualifiers against Mozambique and Cameroon.

The Ivorian is expected to link up with the Burnley squad.

Meanwhile, manager Dyche is pleased to have the attack-minded wideman in his team.

“The owners worked very hard on the Cornet deal. It was a tricky deal but they got there in the end,” he said.

“We look forward to him coming into the building and getting used to what we do and hopefully affecting what we do.

“As well, we want him to come and enjoy his football with us and hopefully push us as well.

Cornet will be the first Cote d’Ivoire player to represent Burnley and he has been handed jersey no. 10.

He could make his debut when his new team travels to Goodison Park,

on September 13 for their league showdown against Rafael Benítez’s Everton.

Burnley are currently in 16th position in the Epl table having picked up just one point from three matches played so far.