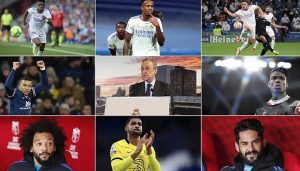 Real Madrid have an important January ahead, with big decisions needing to be made.

January 2020 saw the club sign David Alaba ahead of his summer move, and they’ll be hoping to pull off similar deals this winter.

Kylian Mbappe is the priority, then Paul Pogba and Antonio Rudiger are other targets, all of whom can join on free transfers next summer.

Los Blancos will also have decisions to make about players currently on the books.

Luka Jovic is the clearest example, but there are others as well, such as Mariano Diaz.

The likes of Marcelo, Isco and Gareth Bale will also have light shed on their future.

The Mbappe saga has been ongoing for years now, but from January 1 Real Madrid can finally talk to him freely.

Real Madrid tried to sign the 22-year-old last summer for a reported 200 million euros, but Paris Saint-Germain weren’t willing to let him leave.

Now, it could be taken out of their hands if Mbappe still wants to move to the Spanish capital.

But the agreement won’t come easily as Mbappe’s contract won’t be cheap.

Los Blancos, though, are likely to want to wait now and they’re not expected to put a bid on the table to take him in January.

• Ancelotti: Casemiro, Kroos And Modric Do Things I Don’t Ask Them To Do

Other opportunities in Rudider and Pogba

Real Madrid have to decide if they want to sign Chelsea’s Rudiger and Manchester United’s Pogba, who both have contracts expiring in the summer.

It’s no secret that the Frenchman wants to play for Real Madrid and to join Karim Benzema and – probably – Mbappe at the club.

But there are doubts at the club, as Mino Raiola isn’t an easy agent to deal with.

Pogba’s arrival would also get in the way of the progression of Fede Valverde and Eduardo Camavinga.

Rudiger is another as he is still to renew at Chelsea, and Los Blancos see him as a perfect man to reinforce their defence.

He’s asking for 12 million euros a season though, which has put Real Madrid off somewhat.

Mariano and Jovic to depart?

Real Madrid will have to let players leave and Jovic could request another departure. Mariano’s case, meanwhile, is also intriguing.

Another player who could leave in January is Jesus Vallejo, who has barely had a chance to play under Carlo Ancelotti.

Another priority for 2022 is renewing Vinicius Junior’s contract.

His current deal is up in 2024 and he has one of the lowest salaries in the first-team squad, which doesn’t correspond with his role this season.

At 21, Real Madrid know he has to be protected and tied down.

But the club aren’t worried about Vinicius’ situation as they know his love for the club, and he has never asked for a new deal, as well as always turning down offers from elsewhere.

Eder Militao is also in need of a new contract, with his up in 2023.

There is the belief that the club could extend his current deal by a year before the end of the season.

There’s little to do here other than to wait. By the end of the season these three players will leave, and Real Madrid will want to manage their goodbye in the best possible way.