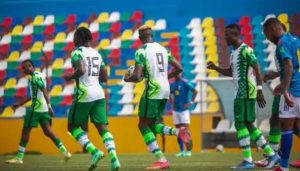 A misplaced long back pass was played to the Cape Verdean goalkeeper, which he could not catch, leading to an own goal.

Osimhen’s cross into the six-yard box is blocked by the goalkeeper, but on the rebound the ball ends up in the back of the net to make it 1-1.

Nigeria have been given two gifts here tonight in Mindelo with two mistakes from the home side contributing to the two Super Eagles goals.

The Super Eagles kicked off their 2022 World Cup qualifying campaign with a routine win over Liberia, but they face probably their biggest challenge of Group C with an understrength team.

Cape Verde Islands host Nigeria at the Estádio Municipal Adérito Sena, Mindelo, on matchday two of the FIFA World Cup qualifying campaign, with the home side poised to snatch the three points and Group C’s top spot at stake.