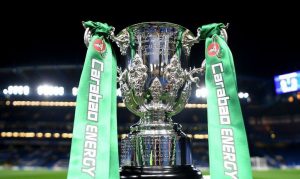 Manchester-United will host West Ham in the Carabao Cup third round,

while holders Manchester City will play at home to Wycombe.

Other standout ties include Aston Villa travelling to Chelsea,

The other all-Premier League game sees Norwich take on Liverpool,

who beat the Canaries 3-0 in their opening game of the season earlier this month.

Arsenal – who thrashed West Brom 6-0 on Wednesday night to record their first win of the season – will face League One opposition when they host AFC Wimbledon.

and their reward is a tie away to Sheffield United, who are yet to record a league win this season since returning to the Championship.

Rafa Benitez’s Everton also face Championship opponents in QPR, as do Leeds and Leicester, who will travel to Fulham and Millwall respectively.

Newly-promoted Watford will host Stoke, while Brighton have a home draw against Swansea.

Brentford will play Oldham – who are currently bottom of the Football League,

and, Burnley also have League Two opponents in Rochdale.

Only two of the 16 third-round ties will not involve Premier League sides – they are,

Preston vs Cheltenham and Wigan vs Sunderland.

The third-round ties will take place in the week commencing September 20.