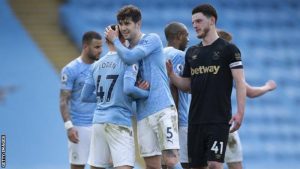 Holders Manchester City will travel to West Ham in the Carabao Cup fourth round.

West Ham beat Manchester United in round three and will face their neighbours – who have won the past four EFL Cups – next.

Championship side Preston will host Liverpool at Deepdale.

The games will be played in the week of 25 October.

Sunderland, the only League One club left, visit Championship side QPR.